Allotey Jacobs axed from NDC for Being honest

Chairmineonline.com has chanced on a letter circulating on social media signed by the chief scribe of the National Democratic Congress, Mr Johnson Asiedu Nketia expelling the party’s former Central Regional chairman from NDC. 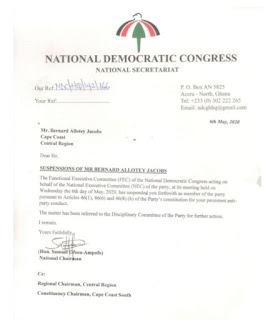 Chairmineonline.com believes there is more to the  reasons cited in the letter to sack Mr Allotey Jacobs

In last year may ,he was suspended forward they called his anti-party comments.

Recently, Mr Allotey has been seen by many Ghanaians as honest and clear about the true nature of Akufo-Addo’s governance. He has described Nana Addo on most political radio shows as mature,visionary and serious minded individual, against his own former President. This situation has discomforted his NDC party people.

Allotey claimed the Planting for Food and jobs policy introduced by the Akufo-Addo government had brought prices of food down ,for he had purchased a whole inflorescence of plantain for ghc 5.00. This revelation attracted lots of insults from his party people. Few weeks ago, Allotey stated on a live show that he was no longer an NDC member. Our outfit is sure this has amounted to his banishment today.

Read the letter below 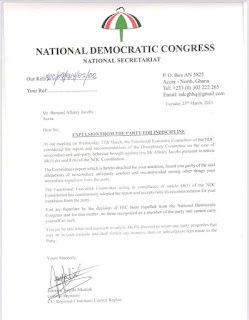